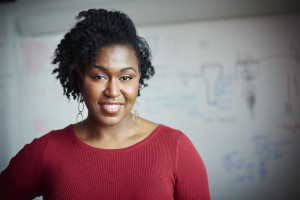 Over the last year, I was introduced into the wonderful world of Pittsburgh start-up accelerators.  Fast forward to less than a year later.  I applied, pitched and was accepted into this cycle of AlphaLab Gear (ALG).  AlphaLab Gear is a hardware accelerator program that  provides seed funding and mentor-ship.  The parent company is Innovation Works.  Ummm, Tamiah, you aren’t an engineer.  How in the world are you in a hardware program?

I may not have studied engineering in college, but I have loads of experience with hair.  Afro textured, with no chemical relaxers to be exact.  Starting with my own, many women admired the styles I began to try on myself after going natural  in 2001.  Going natural means that I no longer used chemical relaxers comprised of sodium hydroxide to straighten my hair.  I was asked on several occasions to give tips on caring for un-relaxed hair.  This continued through 2010 where I finally held a small seminar for women in the community to discuss and learn more about their natural hair.  This group came to be known as It’s a Natural Thang.  Once I was finally convinced to maintain contact on with the women between meetings by creating a Facebook group, I became more passionate about empowering women to love themselves.  Period.

In 2012, after much prayer, I left my job as a social work therapist and returned to cosmetology school.  Yep.  Returned.  You see, between my  freshman and sophomore years in college I went to become a manicurist.  I worked as a manicurist throughout graduate school and beyond.  I went to Pittsburgh Multicultural Cosmetology Academy full time for close to two years and received my cosmetology and teacher’s licenses.  I planned on using my education to write books and curriculum that would include natural hair into cosmetology in a meaningful way.

Cosmetology licensing is now required in many states for those who practice natural hair braiding.  It’s more for public safety than for skill but it’s required nonetheless.  There were no texts (until last year) by the Milady Standard Cosmetology group that had any specific information about caring for and styling natural hair.  In  cosmetology texts students  were basically instructed  to chemically straighten or cut “overly curly” /”ethnic” hair ( I mean, peep the language, folks). Even with the natural hair industry soaring by 2012, there was nothing in the texts about sectioning, conditioning, creating parts, creating sets, rod setting natural hair.  I thought I was going to create the texts that could be use to teach these required courses.

Another thing I noticed was that “ethnic hair” was separated from curly hair in the texts.  Wow!  How can future cosmetologists truly understand this kind of hair if it’s not even included. The categories are basically:  Straight, Wavy, Curly…”Ethnic.” Ethnic is code for black.   Well, I know for a fact black hair with no chemical relaxer is curly.  It so curly that the curls curl on top of themselves.  It is the ultimate curly hair!  Where’s the love?  I had no idea how I’d change that but where there’s a will…

As it turns out, in 2014.  an IANT member noticed the way I built a contraption on to my blow dryer to make blow drying easier.  She was in cycle 2 of ALG and suggested I come down to meet with the program managers.  When I did, they were super encouraging and already aware of the market size.  I kept in contact, did tons of research,  applied and got in.

With the seed funding.  I was able to contract with two amazing engineers!  Johnathan Rideau and Francisco Santiago are two of the most down to earth geniuses I’ve ever had the pleasure of meeting.  Together, I believe we will change so much in the beauty industry by creating tools specifically for coily, curly, spiral shaped hair of every tactile texture.  Passion and implementation and platform go a long way!

In this blog space I will share the CBF core mission.  Some of the statements that are on the home page banners are extensions of that mission.  I will also share the peaks and valleys of startup life, progress on our first hair tool (I have ideas for so many others) and whatever else I feel led to express.  I hope that you will take this journey with me!